When you first want to start a business you think that you really need a product to show. The truth is, though, that you can actually start a business without a product, by understanding if there is a market for your idea. How to do this? Read below how we’ve done it at MavenHut, before writing even one line of code.

A lot of people talk about Dropbox’s launch: they had a video, put it on youtube, got 75,000 people signed-up on the waiting list and so on. Of course, by that time Dropbox was a Y Combinator company, a year old company, for that matter, so this might have helped a little bit (more).

MavenHut, though, wasn’t in the same boat. We’d just gotten accepted into Startup Bootcamp Dublin on the perceived strength of the team, mostly (read MavenHut’s story here). We’ve have had some idea of what we wanted to do, but it was fuzzy, to say the least. So, the first thing to do: we needed to confirm that taking classic games and making them multiplayer was a good thing. Take into consideration that most classic games are single player (Solitaire, Tetris, Minesweeper, Asteroids, Space Invaders aso), so the question we asked ourselves was genuine and needed a real answer.

After some analysis, we decided on Solitaire to be the test game. But we wanted to know if people would actually want to play such a game. And I considered that we needed to have the potential users take some sort of action, not only tell us “Yes, I would play this kind of Solitaire!”. As Ford would put it: “If I had asked people what they wanted, they would have said faster horses.” (though the quote is not sure to be real).

I would rather have some action from potential users, rather than have them tell me what they think they want. 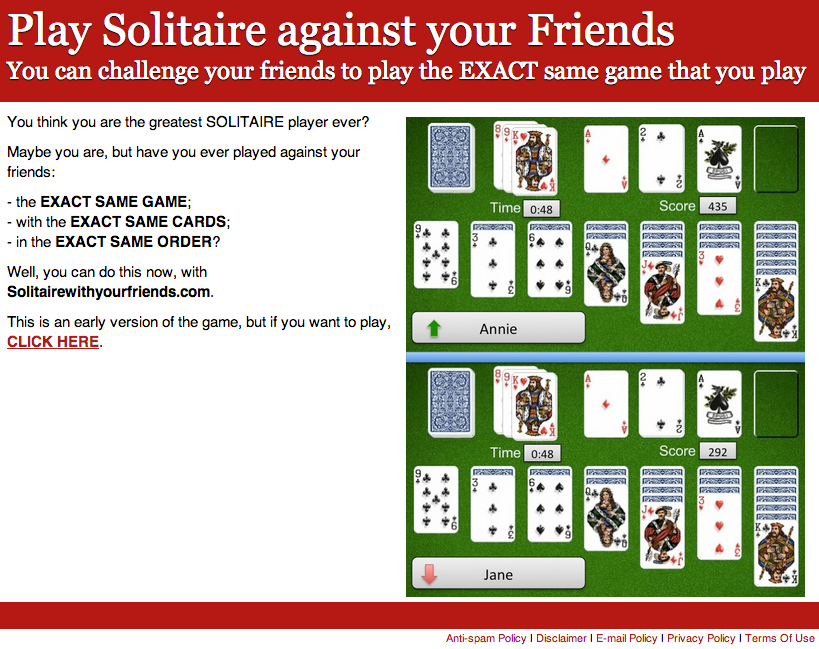 I bought a domain name (solitairewithyourfriends.com – not alive anymore).

Back to the story: I bought the domain and installed WordPress on it. I am graphically challenged so I just chose the simplest theme possible and I wrote one post. The text on it was, basically, telling people that we work on a great version of Solitaire, but it’s not available yet, though you can play the old version. Also, we had a Photoshopped screenshot of how it would look (which I didn’t do, my girlfriend is the culprit).

The most important thing in the entire page was the fact that we had a link to an “old version” of the same game. And you could play that if you really wanted a multiplayer solitaire. The thing is that game never existed. We lied a little bit, but this way we had people perform an action and that told us that they were interested (or, at least, curious).

On the second page, though, people couldn’t play the early version of the game, since we were “just doing some maintenance on it”, but we asked them to complete some form, to give us some information. We thought nobody would do it, but we were pleasantly surprised (numbers below). In the form, in just 4 questions, we asked some info on multiplayer and classic games.

Finally, after building the site, I’ve deployed some Facebook ads and 3 days and $160 later, we had some answers.

So, this is, in short, the story. Now, some numbers.

1. You don’t need an expensive site

Building the site, from the moment I bought the domain name to the moment it was live, took me about 4 hours (I am in no way proficient with WordPress or graphics). It cost me $12 in the domain name from NameCheap [aff], and I already had some hosting on HostGator [aff], but I assume you can use any host. I would suggest, though, one that has Cpanel with Fantastico, since it makes it really simple to install WordPress. I pay $30/month on the HostGator reseller account, but you can find packages for about $7/month for monthly payments (and, for a test, you don’t need more than that).

WordPress is the blogging CMS that’s really easy to install, has lots of features, lots of themes to pick from aso. I use ThemeForest [aff] to buy premium themes (the one on this blog is bought there), so I would suggest them, but I’ve also heard good things about Elegant Themes (never used them, though). Still, even better, I would choose a free theme, and you can find plenty on the web, starting with the WordPress themes repository.

2. Content on the site should be interesting and engaging for you audience

Since we targeted people that played games, I used a more tongue in cheek tone, having fun at our own expense, lowering the initial rejection reaction that people would have for being tricked into getting on a page that promised them an interesting game. Also, a screenshot of what you offer (or promise to offer) them goes a long way, showing that you are actually trying to provide what you said (see the screenshot above with our frontpage).

On the second page we continued with the same attitude, but this time we had to push the “saying sorry” theme since it was a second time we actually tricked the players. So we used the “can’t resist” eyes of Puss in Boots from Shrek and asked to be forgiven. This allowed us to be more cheeky, actually, and also ask for their help with the form: “Pleeeaseeee?”.

3. Users should take some kind of action

The Click here on the first page was the action we were very interested in. And everything on the page drives people to click that. We thought that if they do click (they do some action), they are really interested or curious about what we want to offer (a multiplayer Solitaire). On the same page, you could also click on the Photoshopped image of how the game would look like.

Moreover, on the second page, since we knew we would lose those users anyway (nothing else to do on the site), we added a Google Form (free with Google Docs, puts results in a sheet, best choice in my opinion for something fast and short). In the form we chose to give them just 4 questions – initially 5, because I wanted the “submit form” button to be visible without scroll. The question can be anything you need, we needed some suggestions (the form is still available here). 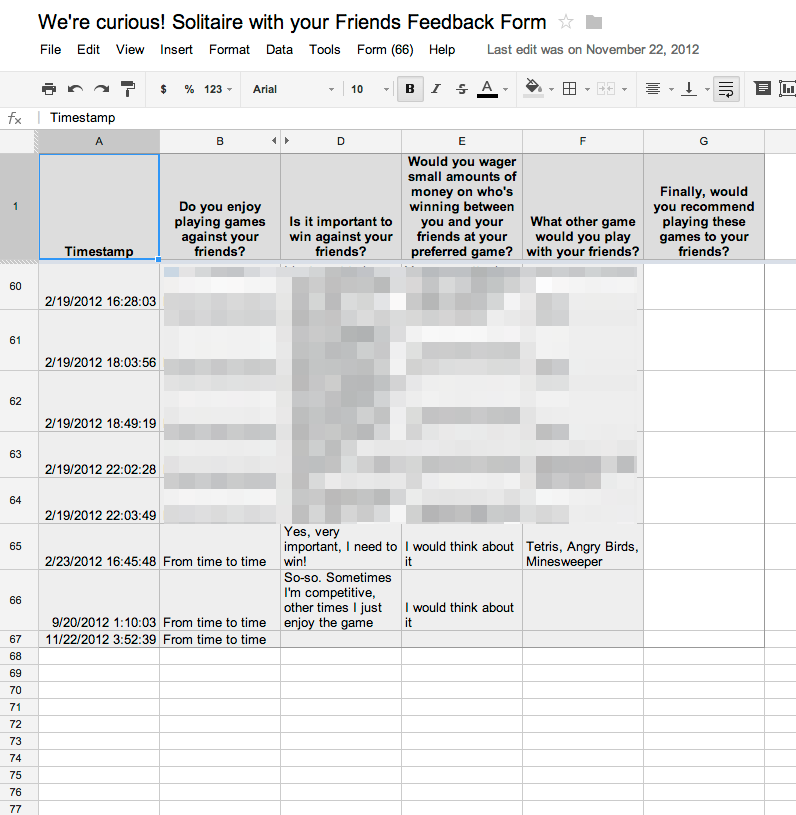 To give you the context, the first iteration of MavenHut was a platform for real money betting on single player games (hence, the third question, about betting). Kinda like what Betable does now, quite successfully I heard.

Finally, a lot of people asked why we didn’t ask for the email addresses. Well, we wanted as many answers as possible in the shortest amount of time and I’ve found out that people become more evasive once they give any type of identification, even email. Moreover, since it was a small test, the list would be really short. Building an email list is a good thing to do, but not in this particular case.

Actually, why don’t you subscribe to my blog’s email list [end of this article]. I am sending, at most, a weekly email with different things from the ones published on the blog.

4. Drive some targeted traffic to the page

This is what a lot of people find difficult. First of all, you need to decide how much is enough: how many visitors, how many clicks, how many answers. We decided that about 200 visitors should be enough to give us an idea of the appeal of Solitaire multiplayer. More, we were really bootstrapped at that point so we wanted to spend the least amount of money possible.

There are two ways to send traffic: free and paid.

Free traffic means going to sites like HackerNews and use AskHN (I think reddit also has a similar section) if your audience is there, go to forums where your audience stays or, if you can, find a blogger to ask his/her audience. The downside of the free traffic is that it takes time to generate it.

Paid traffic means everything from Google Adwords to Facebook Ads. We chose Facebook Ads because we already knew we would launch the first game on Facebook (my co-founders, Cristi and Elvis, had a lot of experience on the platform), so Facebook Ads was the choice. Moreover, you can target specific audiences, from location and age to, what mattered most for us, interests.

We’ve got some interesting results:

I will cover more about Facebook Ads in some follow-up posts, since it would take a lot more time and space to do them justice. As an idea, we chose Solitaire as interest and US as audience. And, yes, subscribe to this blog, so that you know when I write those posts.

Finally, we sent these users to our site, but we needed to follow them in the site and extract some info.

5. Metrics: the most important thing

First and foremost, you need to understand what indicators you want to follow. From the start, our KPIs were:

– how many people reach the site from Facebook Ads (is there any interest in this type of games?)
– how many people click on the first link on the site (Click Here and the image) – this would give us information on the level of interest for this kind of game
– how many people complete the form (self-explaining)
– how much time people spent on the site, especially on the second page (it means they were interested enough to read what we wrote)

All these numbers were available through Google Analytics, the free solution from Google, which we happily installed.

The percentage of people visiting the second page is 60% (145 unique pageviews compared to 240). This means 60% of the unique visitors (approximately, since we cannot compare unique visitors on the pages, but we expect people didn’t visit the second-page multiple times) clicked on “Click Here”. So 136 people visited our second page. Out of those, 66 people submitted the form to us. A staggering, for me, 48% of the people that got on the second page (and 29% of the total visitors).

The answers? Well, those are for us to have, aren’t they? :) There are two of them in the screenshot below (the same as the one above).

Finally, this form gave us the push to start building Solitaire Arena. And it gave us first proof of concept. I am amazed at how many startup founders don’t do this kind of testing (especially seeing how cheap it can be – it cost us less than $200), but I think most of them don’t do it just because they are afraid of the answers. We were quite ready to change course (which we did, we never built a similar platform to betable).

Finally, where does the story end? Here: Solitaire Arena has now, a year after launch, 1,500,000 monthly active users, MavenHut has been the recipient of $700,000 in investment and it has outgrown the 3 initial co-founders several times and we keep growing.

If you enjoyed this article, subscribe below. Though I try to write daily on this blog, I will not send you more than one email a week, usually with something different from the information already available on the blog.

P.S.: I am not a native English speaker. So, if you are and notice some mistakes (typos or grammar, or if you think something would sound better in another form), let me know to correct them. I use this blog to also become more fluent in English, so any help is appreciated.