You are here: Home / Saturday Game / A Personal History of Games 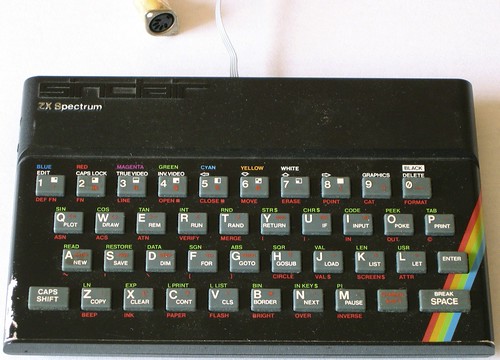 I’ve been playing computer games pretty much for ever. I am 35 now, and I have seen the first computer ever when I was about 5-6, a Sinclair ZX Spectrum (pictured above). My best childhood friend’s father, a Maths professor, had one of these brought in from UK, a rare occurrence in the communist Romania I was living in. That’s when my long love relationship with computer games has begun.

The first game I’ve ever played is either Lode Runner or Jumping Jack. Yeah, it’s been 30 years ago, do you really think I would remember exactly? :)

The thing is, I played a lot of games on that specific computer and I’ve played even more once my parents managed to find, through some connections (as with everything during the communism), a Romanian clone called HC85.

That’s when I started to play everything from the Dizzy series to Manic Miner, from Match Day (the precursor of FIFA games) to SimCity. But the games I fell in love with were the adventure/quest games like The Hobbit, Dizzy or Seymour. This is the main reason I started to learn English, after all, to understand the long lines of text that the characters of these games spoke to each other.

My fascination with adventure games continued into the PC era, with games like Larry. I remembered now that I’ve contributed to the KickStarted campaign for the re-mastered Larry – also, I still remember the happiness when I finally got the “Undress Her” command right. Space Quest, Indiana Jones games or the great Day of the Tentacle (not to forget Sam and Max hit the road, the weirdly funny game) were also games that I would spend my time on over and over again.

30 years later, I still love to play games and I book entire weekends just for this (not as many as I would’ve wanted, unfortunately). The last games I’ve played? The Last of Us, Dishonored and Bioshock: Infinity, on PS3, Runaway: A Road Adventure and Score on iPad, while on my MacBook the last download is Braid. Of course, I am not including here the throng of casual games I play on all devices to learn as much as possible for MavenHut, the gaming company I am part of.

What are you playing now? :)