You are here: Home / Misc / Best acting I’ve ever seen 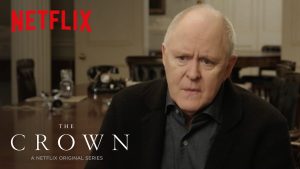 I’ve been watching The Crown in the last week or so. Yesterday I got to episode 9 of the first season, called Assassins (light spoiler ahead).

The context is this: Winston Churchill sits for a portrait with a famous painter – Graham Sutherland. It’s the Prime Minister’s 80th birthday and he was given the opportunity as a present.

There’s a short scene when the character (Churchill, played by John Lithgow)) realizes that he painted a pond 20 times or more because it reminded him of his dead daughter.

The painter says this to him, before the scene (which starts at 35:30 in the episode, by the way):

I was thinking especially of the Goldfish pond here at Chartwell. It’s very much more than that. As borne out by the fact that you’ve returned to it again and again. More than 20 times.
[…]
I think all our work is unintentionally revealing and I find it especially so with your pond.

Beneath the tranquility and the elegance and the light playing on the surface, I saw honesty and pain, terrible pain. The framing itself indicated to me that you wanted us to see something beneath all the muted colors, deep down in the water.

Then you can see on Churchill’s face the agony, the pain, the longing, the missing. Everything a human being can feel, you could see in those 30-40 seconds. No sounds, no words. Just his face. And you could feel how much pain there was inside him.

I wish I was able to be that good at something in my life as John Lithgow is good at acting.

Later update: after writing this, I’ve started to read about the portrait. And I’ve found out that John Lithgow won the Primetime Emmy Award for Outstanding Supporting Actor in a Drama Series for this exact episode.