You are here: Home / Quality of Life / Space for Disorganization: The organized chaos we all need 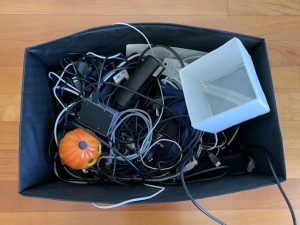 There was a joke in communist Romania:

“At an exam for policemen, they are given a ball and a cube and a board with two holes: one round and one square. The task: fit the cube and ball through the board in front.

The conclusion of the exam:
5% of the policemen are quite smart, 95% are really strong.”

While I’m not a policeman in communist Romania, that’s me. That’s you, I bet, as well: you try to clean and organize your office. Your room. Your email account. Whatever. And you find things you don’t really know what to do with. And you try to push them into a set of categories you already established for your stuff, but it doesn’t really work.

I feel it’s the same thing when you’re trying to organize your life/space in any way. We’re really, really strong: we’re trying to fit stuff in categories it doesn’t fit and it’s never completely as it should be.

The solution: a Space for Disorganization. A space where you dump things you don’t know where to put yet. Or you don’t have the time right then and there. As Janet and Isaac Asimov say:

It also helps to have one – and only one – Space For Disorganization, a shelf or drawer where things can be dumped until you have time to be neat, methodical, and are able to make decisions about where things should go. When you think you’ve lost something, it will probably be in the space for disorganization.

And if you wait long enough you’ll find that more of its contents can be just thrown out, and the process of doing so can serve as a Constructive Activity to Raise Self-esteem.

I found this quote in How to Enjoy Writing by Janet and Isaac Asimov.

And I’m actually doing something akin those lines, even if I never defined it. Especially now, when I’m putting together my home office in the new house.

Here it is, my Box of Disorganization, in the photo below. It’s filled with cables, gadgets, batteries, device manuals, I even see a Halloween decoration piece on top there.

I also have a similar space in Evernote, which is my tool of choice to get things from around the web that I “might” need at some point. Including the links you read in the weekly newsletter I send.

The “Space for Disorganization” in Evernote is a notebook called _Inbox. That’s where I drop everything that’s not specifically targeted for something. And every 2-3 months I go through the notebook and see if what I saved has a more specific place. If not, it just goes to another notebook, called Reference, where I might find it in the future using the search function of the app.

The advantage, for me, for the existance of a “Space for Disorganization”?

It doesn’t generate “paralysis by analysis”.

If I don’t think of a specific place for some thing or for some information, it goes straight to the Space. Also, as you know, small decision sap your energy. Because there’s no effort to think too much about what I need to do with something, I lose less energy on these small decisions, of where to put what. This allows for more energy to organize my space and keep it clean. Physical space or online space.

Keep in mind, though, it needs to be only ONE Space for Disorganization. If you have more than one, you just made a really good system of being disorganized.

Do YOU have a Space for Disorganization? As you can see, even a box from IKEA works.