You are here: Home / Book Reviews / My Rediscovery of Isaac Asimov: I, Asimov 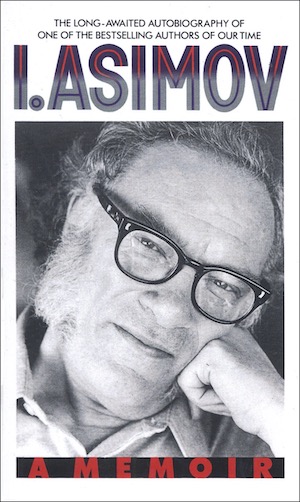 One of the first “modern” SF books I’ve ever read was one in the Foundation series. I don’t remember exactly which one, but I was around 14 and I read all the books written by Isaac Asimov that I could find. Unfortunately, though, you couldn’t find most of them in Romania, where I was born. And you couldn’t find the non-fiction books in particular.

Last week I read I, Asimov: A Memoir, his autobiography. I didn’t read a book that I liked this much in a long time. As I said already, Asimov was part of my youth and I’ve read and re-read the Foundation, Robots and Empire books over and over again over the years. And, through the 600 pages of I, Asimov, I almost turned back in time.

In I, Asimov I’ve discovered a genuine happy person, someone that did what he loved his entire life. I discovered that one of the biggest authors of Science Fiction actually stopped writing fiction novels almost completely for 20 years. I discovered that he enjoyed writing mystery short stories a lot. And this shouldn’t surprise me since most of the books in his SF series are, actually, mysteries. Especially the Robots ones.

His autobiography reads like the archive of a blog, with anecdotes and short stories of the author’s life. It made me smile so often, I didn’t believe it. I was reading in bed and I would read out loud to my fiancée something that made me laugh loudly.

Besides the laughs, I also appreciated the power of Asimov’s convictions. I’m taking example, as well, since sometimes I forget to support my opinions as strongly as I should. And I’m sure my friends might think differently and laugh at the last sentence.

Here, in Asimov’s biography, I found the best reasoning for reading ever. And a refute of watching TV at the cost of reading.

I also pointed out that television yielded so much information that the viewer became a passive receptacle, whereas a book gave so little that the reader had to be an active participant, his imagination supplying all the imagery, sound, and special effects. This participation, I said, gave so much pleasure that television could not serve as a decent substitute.

In short, the age of the pulp magazine was the last in which youngsters, to get their primitive material, were forced to be literate. Now that is gone, and the youngsters have their glazed eyes fixed on the television tube. The result is clear. True literacy is becoming an arcane art, and the nation is steadily “dumbing down.”

I was born in communism and, even if my parents had a big enough library at home, most of the books I read were available from the school library. I still remember how happy I was when I found, in one corner, a new Jules Verne book I could read and share with my class mates. So I understand the value of access to books. And I’ve started The CEO Library because I know you need more than what the school provides.

I received the fundamentals of my education in school, but that was not enough. My real education, the superstructure, the details, the true architecture, I got out of the public library. For an impoverished child whose family could not afford to buy books, the library was the open door to wonder and achievement, and I can never be sufficiently grateful that I had the wit to charge through that door and make the most of it.

I was surprised that Asimov was writing in 1992 that we, as humanity, are destroying the planet. And, 30 years later, he was and is right, unfortunately. And we fight with the results of neglect.

We are now perfectly capable of damaging the planet beyond repair in any reasonable time, and are, in fact, in the process of doing so.

And, again, in 1992, he wrote the perfect explanation of the difference in thinking between “conservatives” and “liberals”. Living in a world where the split is even more obvious and evident, I can’t but wonder at Asimov’s understanding of life.

I have been a liberal all my life. I have had to be. Early in life, I noted that conservatives, who are more or less satisfied with things as they are and even more satisfied with things as they were fifty years ago, are “self-loving.” That is, conservatives tend to like people who resemble themselves and distrust others. In my youth, in the United States the backbone of social, economic, and political power rested with an establishment consisting almost entirely of people of Northwestern European extraction, and the conservatives making up that establishment were contemptuous of others.

If you enjoyed Asimov’s books, you’re gonna love this one.

◀The Witcher on Netflix. And The Witcher 3: Wild Hunt on Switch
Home Office Bookcases: Complete Reviews with Comparisons▶