You are here: Home / Games I Play / The games I’ve played in the last decade 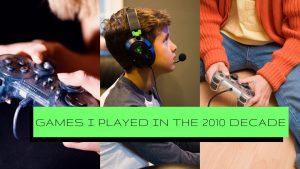 I know, I know, it’s not books. And The CEO Library should be about books. Maybe :) You can find some gaming books recommendations at the end of this blog post.

I love playing games, especially games with great narrative. So I was looking through Den of Geek’s Best 100 games of the decade and I was thinking I played quite a lot of them. Especially since I don’t play games as much as I want to.

Also, don’t forget, I started and sold a gaming company in the past decade. So I was doing “research” :D

Go to the Den of Geek list to see some more details about the games, but here are the games I played (or at least touched in some way) with a little bit of commentary:

There you have it. 48 games. I played others as well, of course, especially on the mobile devices. I mean, I didn’t put on the list Candy Crush and the hundred hours of “research” I put into it :D and several hundred dollars, just for good measure, as well.

The games above are just the ones that are also part of the list at the Den of Geek. Go there and read more, since it’s not mine.